Sukimuland: take a trip back in time to Japan‘s olden days 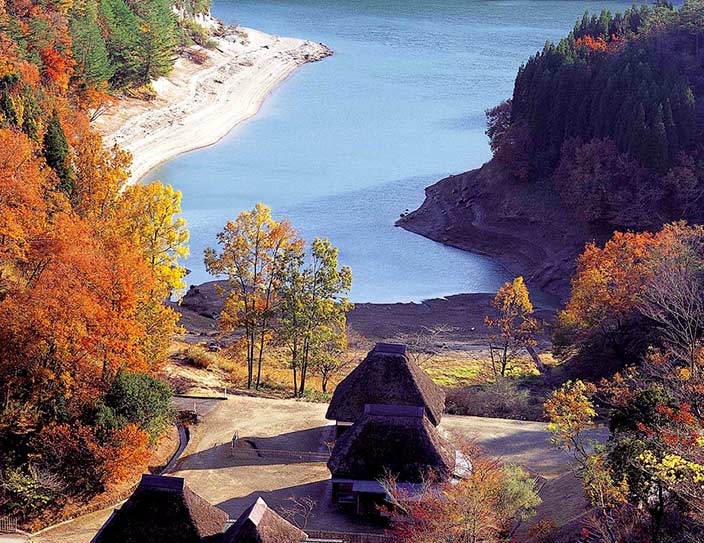 Far from Tokyo, when you go to the southwest of Japan, to the island of Kyushu, is a small and charming area called Suki. It is part of the city of Kobayashi, in the Prefecture of Miyazaki. Miyazaki Prefecture is known for being the land of sunshine and lush greenery, and Suki isn’t an exception: it is surrounded by mountains and in the middle of nature that seems to have been barely touched by the human hand. It also features Sukimuland, an amazing place to get away from your usual routine and the norm, and a truly refreshing break. There are several places in Suki that will allow you to do so, but the best way is to stay in one of the Karukaya, old Japanese houses with a thatched roof.

Karukaya are authentic old Japanese houses, dating back to the Meiji Period (late 19th century). They were built throughout Japan, but having this many of them in the same place is actually quite rare. Originally, these thatched roof houses were all over the western area of Miyazaki Prefecture, some 30 minutes away from the town of Suki. However, in order to maintain them and preserve them better they were dismantled and put back together in the same place, Sukimuland. Which is why you now get to spend the night in one of them!
Four different accommodations named after Suki’s specialty, chestnuts, are available with some slight changes in sizes and furniture. Every one of them has been modernised with essential features such as air conditioning or refrigerators, and all meals are included and prepared with great care, using only seasonal products local to the area. It should be noted that the restaurant is not only open to the Karukaya guests, which means that anyone can enjoy their tasty cooking.

There are multiple ways to enjoy staying the night in Suki, such as bungalows or camping, but the great benefit of these houses is to get to experience a more traditional Japanese way of life. Those habitations were built without using a single nail, and offer authentic features such as an iron kettle-shaped bathtub or an irori, a sunken hearth for cooking. What’s more, you actually get to disconnect from your routine, and modern life. For that very reason, there are no televisions, radios or clocks in the houses: this is a unique opportunity to enjoy nature around you and make the most of it, with no interruptions. 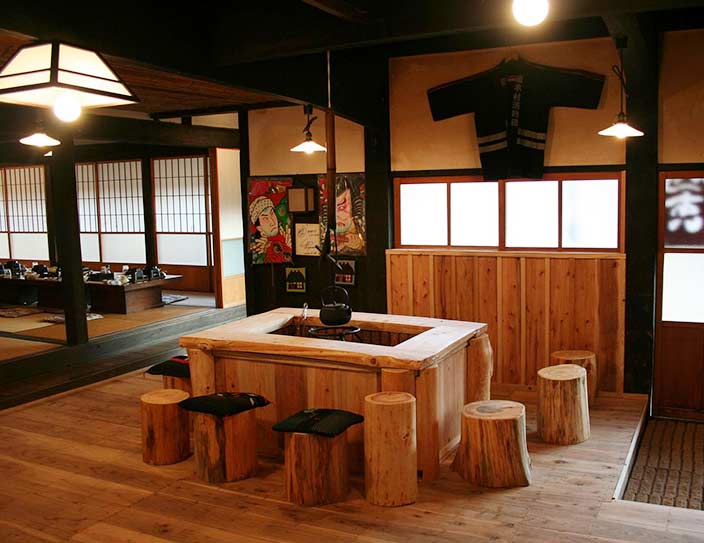 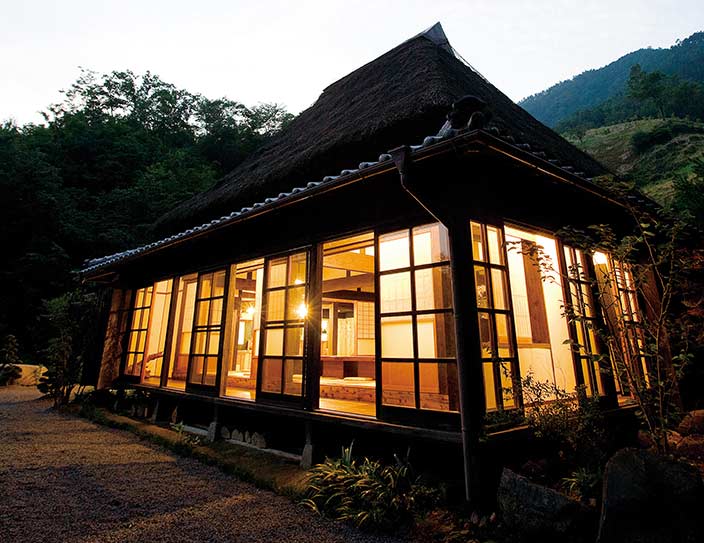 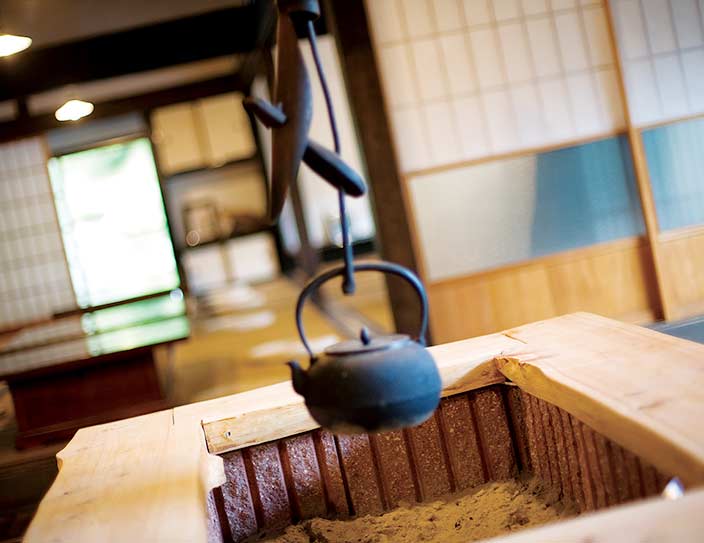 To add to the historic and magic atmosphere of Sukimuland is the legend of “Mamako Waterfall”, a place of scenic beauty known in the whole prefecture. “Mamako” actually means “stepchild” in Japanese, and the biggest rock at the top of the waterfall is engraved with the words “Shiramitori-iwa”, which could be translated as “rock of lice removal”. This may sound like an odd name until you hear the story behind it:

A little girl was living with her parents near the top of the waterfall. Unfortunately, her mother died of an illness and the father remarried with a woman who did not care much for her.
One day, as the father went to work in the mountains, she was playing with the belt of her outfit, tying knots to keep herself entertained. Her step-mother called her, in a sweeter voice than usual, inviting her to come and sit on her knees by the top of the waterfall so she could get rid of the nits on her head. The child obeyed and her step-mother started tending to her while she still played, happy that her father’s wife was finally being nice to her. Then, all of a sudden, the step-mother pushed her with all of her strength from the top of the waterfall. The child fell, but unbeknownst to her step-mother, she had been tying their belts together, and so they both fell down to the bottom of the lake.

Upon hearing this tale, people brought two statues of Kannon, the Buddhist deity of compassion, near the place the two used to live. That is why some people have also started to call the waterfall “Kannon Falls”. The official name is actually Suki Waterfall, but the two nicknames, “Mamako” and “Kannon”, are as widely used by people who come from all over the Prefecture to see this stunning waterfall, and enjoy the feeling of peace that emerges from the amazing nature all around. 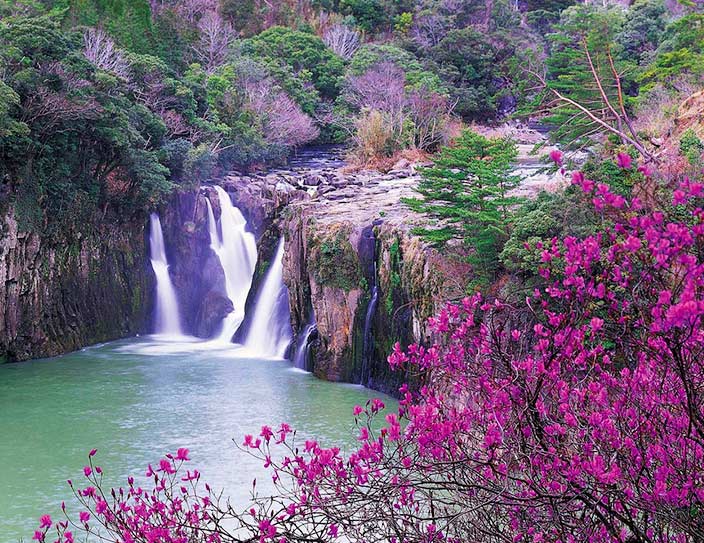 Enjoying your time in Sukimuland

Greenery is everywhere in Suki, and the noises of the city are nowhere to be found. Instead, there are only birds chirping, deers bleating and the relaxing sound of the waterfall nearby.

August is usually the liveliest month, with a festival taking place every weekend, including delicious activities such as catching cold noodles flowing in a long flume of bamboo, or simply eating shaved ice as you enjoy the view from the suspension bridge. Of course, any sunny day is a good pretext to barbecuing, hiking in the mountains or enjoying the outdoor river pool, but you can also kayak at the foot of the waterfall on Lake Ono, or if you feel braver, surf with a stand up paddle board.
If you are in the mood to laze around, you can easily enjoy the beautiful nature while bathing in the natural water of the Kajikanoyu hot springs, relax on a boat cruise on the lake or quietly fish for carps or black bass. 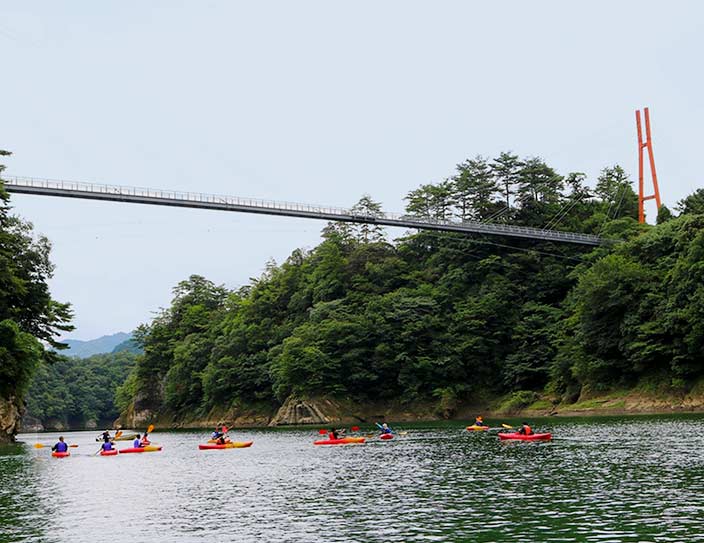 Another interesting place in Suki is the shochu brewery. Shochu is an alcohol that is native to Kyushu, and a bit stronger than sake. This brewery was established in 1890 and makes their shochu from scratch themselves, using freshwater pumped from 120 meters underground. The jars used for shochu making and fermenting are estimated to date back from before the brewery was even opened, the oldest being 160 years old, and the most recent… 130 years old.
The brewery offers tours, and if it is not the busiest period of the year (September to November), the owner himself might be your guide. This is also a great opportunity to have a delicious shochu tasting! It is held in very high regard by Japanese shochu critics, and there is no doubt you will enjoy it as well.

Last but not least, if you are lucky enough to come during the fall, you will also get to enjoy Suki’s specialty, chestnuts! A festival is even organised for the occasion, where everyone is invited to gather them in the forest, which is usually great fun, especially for families.