PASMO is a prepaid IC card issued by the Tokyo Metro which can be used to travel on the Metro, JR and other trains. Just touch the card on the card reader when you start and end your journey. Both cards can be purchased at stations in Tokyo. In other major cities (Osaka, Fukuoka, Nagoya Sapporo) also offer similar IC cards such as ICOCA, Kitaka, Sugoka, Manaca, Nimoca etc. which can be used throughout Japan.

ICOCA is a prepared IC card issued by JR West rail network in the Kansai (incl. Osaka and Kyoto). It is a convenient, all-in-one travel card for JR West trains, subway, private railway, and buses, and other major cities (Tokyo, Fukuoka, Nagoya, Sapporo). And also participating shops in the station and around town displaying the ICOCA marks. Before you leave Japan, this ICOCA refund can only be done at JR West Area (Kyoto/Osaka/Kansai area).

Suica is a pre-paid IC card issued by JR East to travel around Tokyo and also other major cities in Japan. It also can be used for shopping at registered shops including major convenience stores, shopping malls AEON, electronic stores BIC Camera and Yodobashi Cameras and many more.

How to use?
You will just touch in with your Pasmo / Suica / Icoca card on the card reader at the ticket gate when you start and end of your journey to pay the correct fare.

How to top-up?
You can top up your Pasmo / Suica card in stations at ticket machine or fare adjustment machines. The minimum amount is 1,000 yen and maximum is 20,000 yen can top up at once.

Other features?
Suica, Pasmo and Icoca cards can be used at major convenience stores, vending machines, coin lockers, restaurants and taxi if they are displaying Pasmo / Suica / Icoca logo. 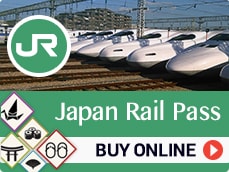