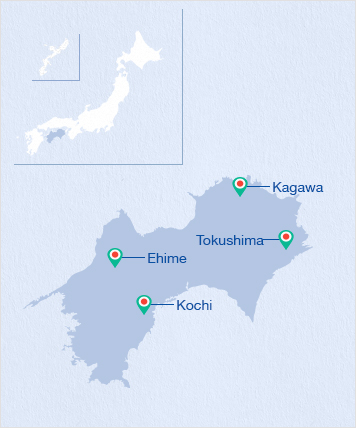 Shikoku is the smallest and least populous of the four main islands of Japan located south of Honshu between the Seto Inland Sea and the Pacific Ocean. Shikoku consists of four regions: Kagawa, Tokushima, Ehime and Kochi. Shikoku is a very mountainous region, with a range of mountains running through the middle of the island. Some of which, notably Mt. Tsurugi and Mt. Ishizuchi are relatively popular tourist destinations, being the tallest mountains in Western Japan. Mt. Ishizuchi, in particular is a great mountain to visit for those with an adventurous spirit as parts of the climb are usually traversed using chains attached to the top of a rock face. As well as mountains, there are lots of forests and trees, and the foliage is particularly beautiful in the autumn when the leaves change (known in Japanese as koyo), causing the surrounding mountains to become awash with vibrant red, yellow and orange colours. Shikoku is also the site of Japan’s most famous and oldest pilgrimage, an 88-temple pilgrimage route known as Shikoku Ohenro. This 1,400 km long route was initiated in 815 by Kobo-Daishi (Kukai), founder of the Shingo Sect of Japanese Buddhism. To visit all the 88 temples on foot takes 45 days, although trips by car, bicycle and bus are available. Shikoku is off the beaten path but it is a welcoming and tranquil place to visit, full of nature, fresh food and kind people. 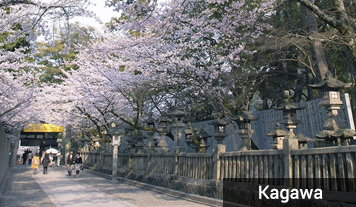 The Kagawa prefecture, Japan’s smallest prefecture, is situated on the north-east corner of Shikoku Island. Kagawa is the birthplace of Kobo-Daishi (Kukai), founder of the Shingo Sect of Japanese Buddhism. Kagawa is also famous for its Sanuki Udon noodles (must-try!) and the calm water surface dotted with numerous small islands scattered on the inland Seto Sea. 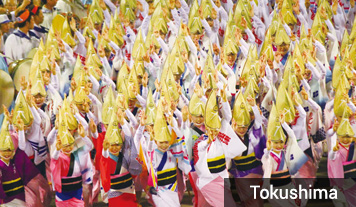 The south eastern part of the island of Shikoku is Tokushima prefecture. Tokushima prefecture much like its neighbour, Kochi is a very rural part of Japan with an abundance of nature, both in the form of mountains and forests as well as the sea, for which the area around Tokushima is particularly unique due to the presence of the Naruto whirlpools. Tokushima is also famous in Japan for its ramen, which is saltier and sweeter than the varieties you find in other parts of Japan. If you happen to head down this way for the fantastic nature or the Awa Odori festival, be sure to try some of this regional delicacy. 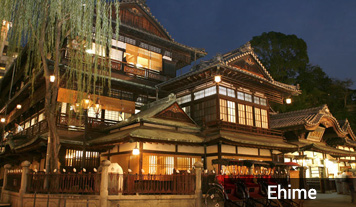 Ehime, like the rest of the island of Shikoku is surrounded by nature, with sea on one side and mountains on the other. As one of the four prefectures of Shikoku, it contains many of the temples that make up the Shikoku pilgrimage, an 88 temple trip that takes you around the edge of the island. Ehime’s most famous attraction however, is Dogo Onsen, one of Japan’s oldest and most famous hot springs. The building itself is beautiful wooden building from the Meiji Period and is now famous worldwide as being the inspiration for the bathhouse featured in Studio Ghibli’s ‘Spirited Away’. There are many ryokan in this area and it is not uncommon for visitors to wander around in their yukata, a traditional Japanese summer garment, which gives the town a very traditional feel. Despite this traditional feel, Matsuyama is actually the most populous city on Shikoku and has the cuisine and nightlife to go along with this. In Ehime you can find Mt. Ishizuchi, a particularly great mountain to visit for those with an adventurous spirit as parts of the climb are usually traversed using chains attached to the top of a rock face. Further, Ehime has magnificent views of the Inland Sea’s shore and the Seto Inland Sea National Park, and many choose to cross the inland sea by cycling across the bridge that connects Ehime to Honshu, Japan’s main island on a 60km long trail that gives fantastic views over the many islands in the area. 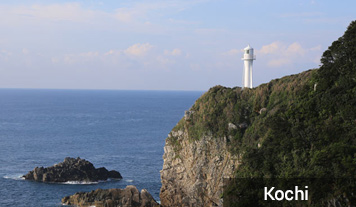 Kochi prefecture is located south of Shikoku and is known as the birthplace of Sakamoto Ryoma who made a significant contribution to Japan's rapid modernization marking the end of the Edo period.