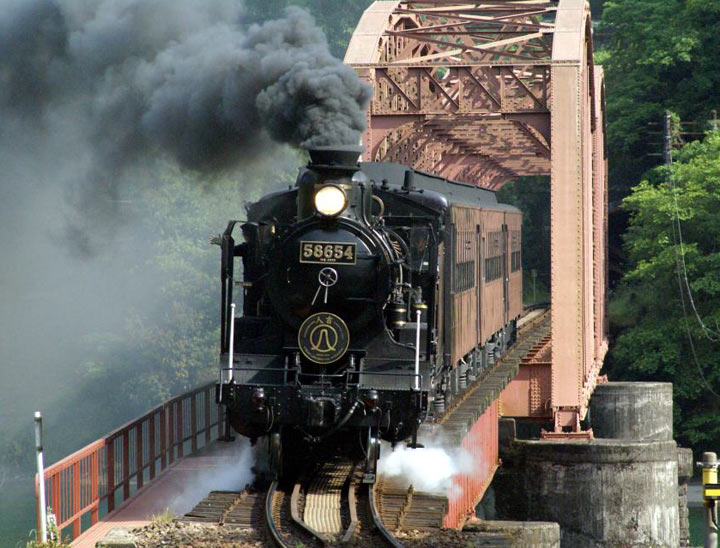 Travelling by rail is a great means of admiring the spectacular scenery of Japan and meeting local people along the way.

The JR Hisatsu Line which runs between Yatsuhiro station (Kumamoto pref.) and Hayato station (Kagoshima pref.) is considered to be one of the most scenic routes in Japan. Visitors to this magnificent Island can also enjoy one of the unique sightseeing train routes, which themselves are attractions.

An onboard trolley service is available on most Shinkansen and limited express services, selling ekiben, as well as a variety of sandwiches, snacks and drinks.

Ekiben is a special type of bento box sold at train stations, on Shinkansen and limited express trains. Each station features its own local specialties and some even sell signature ekiben that are well-known throughout Japan. Ekiben festivals and competitions have become very popular in Japan. Japanese travellers often say that a train travel is not complete without having an ekiben on board!

Enjoy the ride with an ekiben while the train runs through the stunning countryside!!

The limited express Yufuin No Mori is a highland resort express train which operates between Hakata (Fukuoka) and Yufuin, one of the most popular hot spring resorts in Kyushu.
When the train passes a scenic area, announcements will be made in English and Japanese and the train slows down as it approaches the viewing spots.
There are no Green seats or non-reserved seats on this train. Seat reservations must be made before boarding. 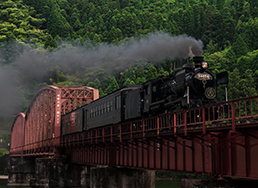 The SL Hitoyoshi is a locomotive steam train which was brought back into operation on the 25th April 2009 in response to popular demand from railway enthusiasts.
SL Hitoyoshi makes a single journey on selected days between Kumamoto and Hitoyoshi. The train stops at Shin-Yatsushiro, Yatsuhiro, Sakamoto, Shiroishi, Isshochi, Watari and Hitoyoshi and the total journey time is 149 mins.
After Yatsushiro Station, the train runs on the Hisatsu Line, where the scenic rail journey overlooking the Kuma River begins.

< SL Hitoyoshi Operation Dates for 2016 >
SL Hitoyoshi runs only once a day on selected days between Kumamoto and Hitoyoshi.
*There are no Green seats or non-reserved seats on this train. Seat reservations must be made before boarding. 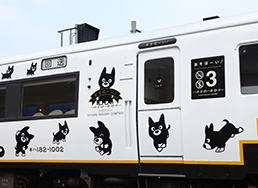 Asoboy is a limited express train which runs between Kumamoto and Miyaji via Aso.
As the train advances through the mountain scenery, it makes two switchbacks near Tateno station enabling the steep ascent to the top.
This train features panoramic seats with incredible views of mountain scenery and there are many facilities for families and kids to enjoy the ride.
There are no Green seats or non-reserved seats on this train. Seat reservations must be made before boarding. 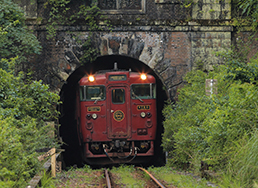 Isaburo & Shinpei is considered one of the best local trains in Japan. Isaburo departs from Hitoyoshi and travels southbound to Yoshimatsu, and Shinpei is the northbound service departing from Yoshimatsu. The service operates twice daily, and the total journey time is approximately 80 minutes.
Soon after leaving Hitoyoshi, the first highlight is at the Okoba station where the train changes its direction and makes a switchback so it can climb up a steep slope. After Okoba station, the train goes back and enters the loop line. There is another switchback at Masaki Station.
After Yatake Daiichi Tunnel (2,096m long!), you will arrive at one of the "Three Great Sceneries” of the Japanese railways, which offers a spectacular view of Ebino Heights and the Kirishima mountain range. The train slows down as it approaches viewing spots for photograph opportunities. 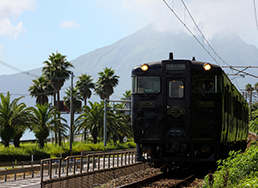 Hayato no Kaze is a limited express train running daily between Yoshimatsu and Kagoshima-chuo. The Hisatsu line runs from Yoshimatsu up to Hayato. The train features a distinctive livery; its all-black painted body is embellished with a gold emblem on each side.
Opened in 1903, Osumi-Yokogawa Station and Kareigawa Station are two of the oldest wooden station buildings in Kyushu. The train stops at both Osumi-Yokogawa and Kareigawa Stations for about 5 minutes so visitors can alight from the train and explore the area around the station. 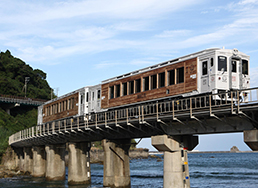 The sightseeing express train runs through the beautiful mountains and along the Nichinan coast in Miyazaki on selected days. The train exterior and interior features Obi cedar which is produced locally.
Visitors can enjoy the view of the wave-shaped rock formations known as ‘Oni no sentakuita’ (Ogre’s Washboard) between Aoshima station and Kitago station.
The train stops at Obi station for about 10 minutes, where local products and sweets can be purchased.

Ibusuki no Tamatebako (aka Ibutama) is the limited express train running between Kagoshima-chuo and Ibusuki. This service started in March 2011 and has quickly become a very popular sightseeing train in Japan. Ibusuki no Tamatebako, literally meaning "Ibusuki Treasure Box", is named after the famous Japanese folktale "Urashima Taro" which originated from this area.
It tells the story of a fisherman named Taro, who was invited to the undersea kingdom of “Ryugu” after having saved a sea turtle from being tortured by children. He stays there for a few days, but when he returns home he finds himself a couple of hundred years in the future. When he leaves Ryugu, he is gifted a box named “Tamatebako” which he was asked not to open. In his state of grief, he opens the box to find white smoke, and Taro suddenly becomes a wrinkly old man.
As passengers board the train, white mist is emitted from above the door, as a special welcome based on the story of Urashima Taro.
There are no Green seats or non-reserved seats on this train. Seat reservations must be made before boarding.