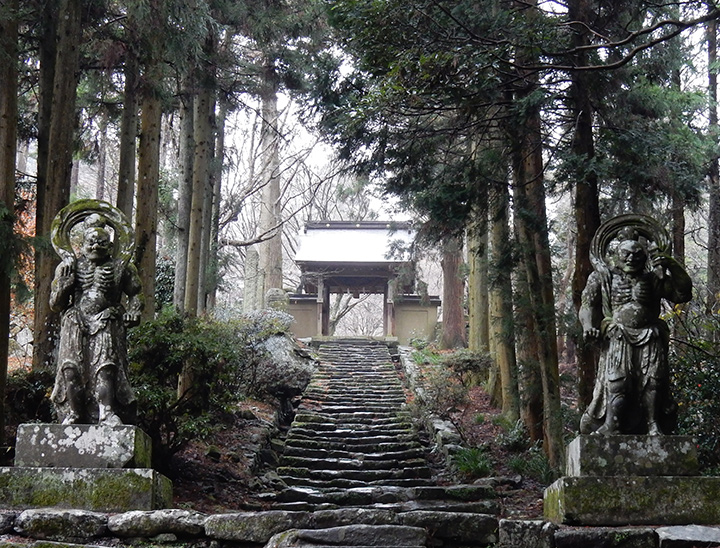 Almost circular in shape, Kuniaki Peninsula is situated in the north-east part of the Oita prefecture. Right in the middle of the peninsula there is Mount Futago - the centre of Kunisaki’s Rokugo Manzan Buddhist-Shinto culture.
‘Rokugo Manzan’ (literally “six districts full of mountains”) has been used as a generic name for all the temples in the ‘six districts’ on Kunisaki peninsula.
The ‘six districts’ radially spread from the centre of Mount Futago.
The region is abundant in unspoilt forests and paths and it is highly recommended that those who want to enhance their spiritual powers through rigorous mountain rituals visit the area and experience the true Japanese countryside.
There is a limited bus service operating on the peninsula but there is no train service. To get around, one can rent a car or take a taxi.

This temple located on the slopes of Mount Futago was founded by Ninmon Bodhisattva around 718 AD and it soon became the central temple of Rokugo Manzan culture, Tendai denomination. The two powerful Deva King statues built in 1814 guard the staircase leading up to the entrance. The overhead tree brush makes for a natural canopy. Although any season is good to visit the temple, is has been suggested that autumn is probably the best time to see the leaves change their colour. 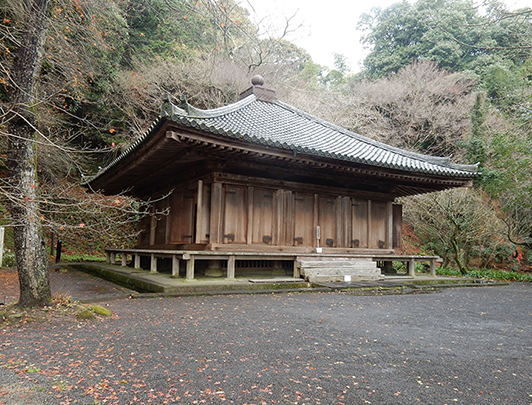 This temple is believed to have been founded in 718 by ‘Ninmon bosatsu’ as a tutelary temple of the Usa shrine. Its main hall, Amida-do (Fuki-ji Odo), the oldest wooden structure in Kyushu, is designated as a National Treasure. The principal image of worship at this temple, Amida-Nyorai’s wooden statue, was carved from a Japanese torreya tree by the founder of this temple. The traces of colourful pictures portraying various themes of the Buddha on the wooden walls of Amida-do have been designated as an Important Cultural Property by the national government. The precincts of the temple are also designated as a historic site. 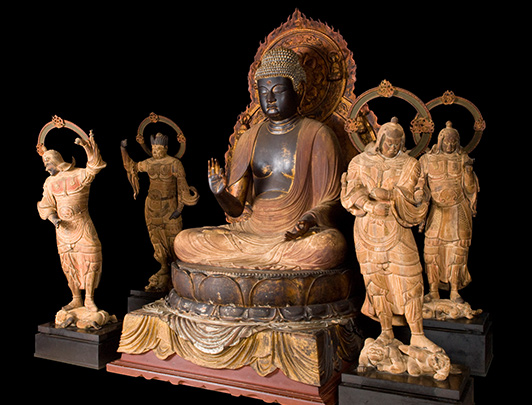 It was built as part of the Makisandenjo-ji (temple) complex and was founded by ‘Ninmon bosatsu’ during the same period as Fuki-ji. ‘Makisandenjo-ji’ was once one of the largest temples in ‘Rokugo Manzan’, on Kunisaki peninsula. Unfortunately, historical records of the temple were lost in a fire a long time ago. Luckily, the nine Buddha statues of Maki Odo survived and from then on have been looked after the religious locals. The nine statues including the principal images of worship at this temple, ‘Amida-Nyorai’ and ‘Daiitoku-Myoo’ (the largest wooden animal shaped statue in Japan) have been designated by the national government as an Important Cultural Property. 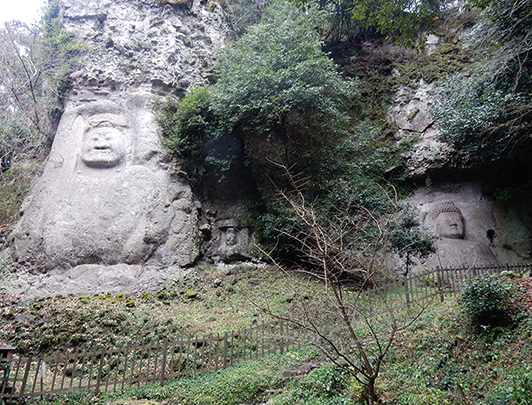 A ten-minute climb up some steep stone steps will take you to two massive stone Buddhas carved on the walls of a cliff: an eight meter tall ‘Fudo-myoo’ and a nearly seven meter tall ‘Dainichi-nyorai’ Buddha. They are the largest Buddhist stone carvings in Japan and have been designated by the national government as an Important Cultural Property. There is no record about when these carving were created, but it is assumed they were made during the Heian period (710-1185). 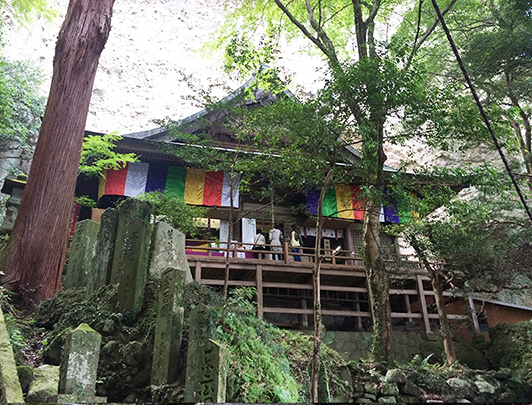 This temple is said to have been built in 648 by the Father of Shugendo, En no Gyoja who proclaimed ‘Monju’ Bodhisattva (obtained from Godaisan, China) the temple’s principal image of worship. ‘Monju’ Bodhisattva is widely known as the Mother of Wisdom so people visit the temple and pray for enlightenment and sagacity. Two powerful ‘Nio’ statues guard the entrance to the temple’s stone staircase (about 300 steps) leading to the Inner Sanctuary Hall where prayers to ‘Monju’ Bodhisattva take place. The 30cm bronze statue of Monju Bodhisattva kept here is considered to be a treasured Buddhist statue and is only unveiled once every 12 years in a year of the rabbit (2011, 2023). Behind the hall, there is a cave that gushes out spring water and it is believed that those who drink it will be granted wisdom. In the lower hall down the stairs there is a receptacle with water – it is believed that those who will drink it will acquire sgacity. 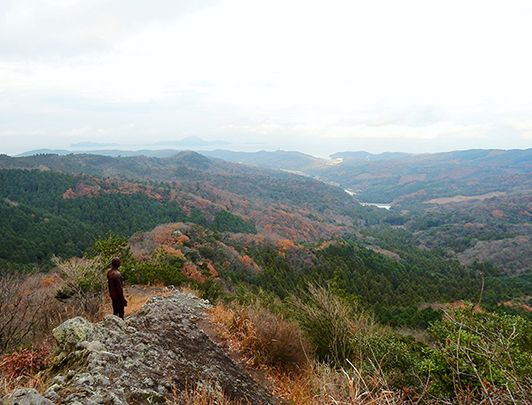 Kuju Renzan lies in the south-west of the Oita prefecture and stretches along the border of the Kumamoto prefecture. It consists of 7 major volcanic mountains with the altitude of over 1,700m including the highest mountain in Kyushu, Naka-dake (1,791m). It is also part of the Aso-Kuju National Park. Within the mountains, there are two wetlands: Tadewara and Bogatsuru – both have been registered as the sites of the Ramsar Convention on Wetlands.

There are many ways you can enjoy this area; you can drive through ‘Yamanami (mountain scenery)’ along the Highway which runs between Yufuin and Aso; you can choose to trek the mountain range or go hiking in the wetlands. Early in the summer, the pink bloom of “Miyama Kirishima (a kind of azalea)" covering the slope of Hiji-dake and Mount Daisen attracts many visitors who also visit Kyushu to admire autumn leaves in November.

The easiest and probably most popular method of transport between Chojabaru Kuju Renza is via ‘Yamanami’ Highway - one of the starting points of major hiking/trekking/climbing routes. This area is also famous for Tadewara wetlands. In case you want to know more about the region visit the Tourist Information Centre.